With four buildings to accommodate products from every category, you really can find it in Red. Want to learn more about Dallas Market Center’s buildings? Take a look at the campus map and brief descriptions below. 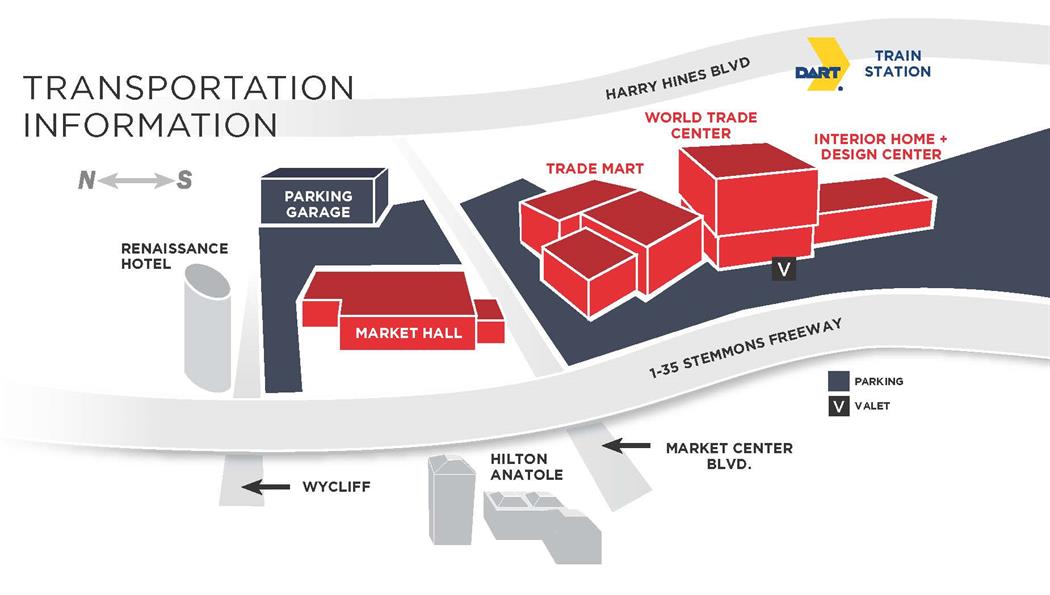 Trade Mart is home to hundreds of showrooms featuring gifts, decorative accents, lighting, tabletop and stationery. Opened in 1959, its four floors surround an atrium called The Grand Pavilion at the Trade Mart, featuring the largest indoor marketplace pond complete with live fish and palm trees. Many special events are held here including the Dallas Fashion Awards gala, ARTS Awards gala and private parties. It was also the destination of the President John F. Kennedy motorcade in 1963 where he was scheduled to give a speech to 2,600 people at a sold-out luncheon. In 1964, Elisabeth Frink of England created the bronze sculpture “The Eagle” in honor of the president. It sits outside the main Trade Mart entrance today. The building was expanded in 1976 and 2007 and now has approximately one million square feet of space. Dallas Market Center management and marketing offices are located on the fifth floor of this building.

Consumers flock to Market Hall for popular boat, bridal, car and home and garden shows. This is the only building on the campus opened to the public, hosting more than 60 consumer shows each year and housing temporary trade shows during market weeks. It opened in 1960 and contains 202,000 square feet. Want to know what shows are coming up? Take a look at the Market Hall calendar of events.

World Trade Center is the tallest building on the Dallas Market Center campus. Originally opened in 1974, it was expanded from 7 to 15 floors in 1979, totaling 3.1 million square feet. Nine of its floors house showrooms of gifts, decorative accents, lighting, furniture, rugs, textiles, fabric, jewelry, toys and design furnishings. FashionCenterDallas®, the home of apparel and fashion accessories, is located on floors 7 (Men’s), 13 (Accessories) and 14 and 15 (Women’s). KidsWorld, an entire marketplace of children’s products, is located on the 8th floor. Temporary exhibits can be found on floors 1, 10, 11, 12 and 13 during markets. The ground floor features the Hall of Nations atrium, exporters, UPS store, FedEx Kinkos store and The Gourmet Market.

A 440,000 square foot marketplace with two floors of showrooms serving retailers and interior designers. The first floor, redeveloped in 2017, includes dozens of home décor showrooms from leading manufacturers and is open daily. The second floor features showrooms for permanent floral, holiday, and gift.